In this article, you know learn 10 video editors with iconic cinematic effects that are bound to boots viewer response to your videos.

Video editing effects have become much more versatile in usage, due to the wide range of easy-to-access after-effects and editing tools being introduced each year. No matter if you are looking to share a visual story or finishing a corporate brand video – the cuts and transitions used to highlight the visuals is what helps retain viewers with limited attention spans. Surely, the right combination of effects require the right set of tools for the job.

01 5 Stunning Video Editing Effects Every Marketer Should Be Using
02 Why These 10 Video Editors' Effects Could Catch Your Eyes?

Part 1: 5 Stunning Video Editing Effects Every Marketer Should Be Using

Let’s look into some classic and contemporary effects offered by some of the best video editors; both pro and basic.

A video comprises of several takes or shots which could be taken from varying angles or include multiple layers of effects and each of these shots need to connect with each other organically. 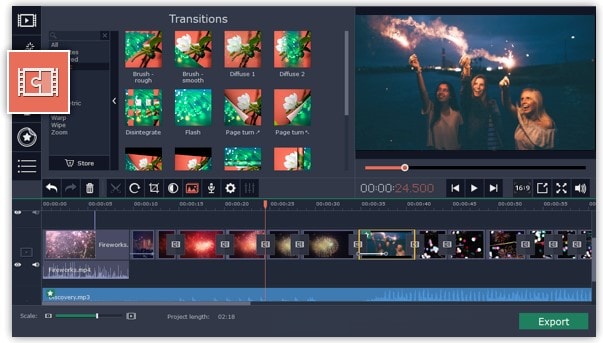 There can be many types of transitions, some of the basics include;

2. Effects that show Passage of time

Video speed can significantly change the way we perceive the video or the passage of time. Let’s say you are recording a cooking show or a sports video and there are certain moments you wish to highlight in slow motion. You can also skip through other moments that may seem mundane in real time by using fast motion, or time lapse. However, video speed can effectively influence the way we perceive visuals. 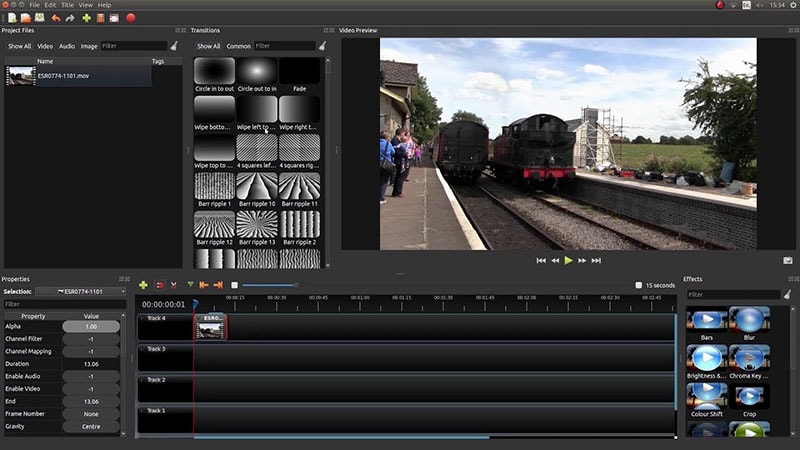 When it comes to the eyes, almost everything is about colour. You can transform a scene’s emotional response or make the setting more subtle by just adding and/or altering the appropriate colour effects. 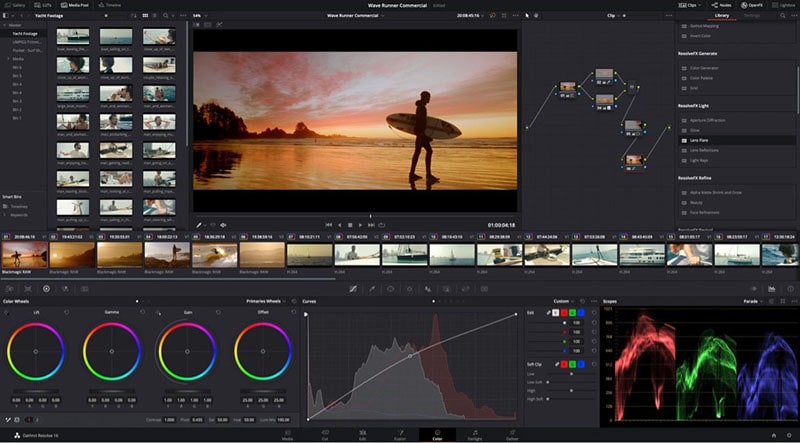 A slightly more complex editing term used to define multiple layers of special effects, graphical elements, texts or still images combined with a scene or shot to give it a sense of style. This may involve applying blending, masking, chroma key or adjusting brightness and contrast to recreate cinematic visuals. 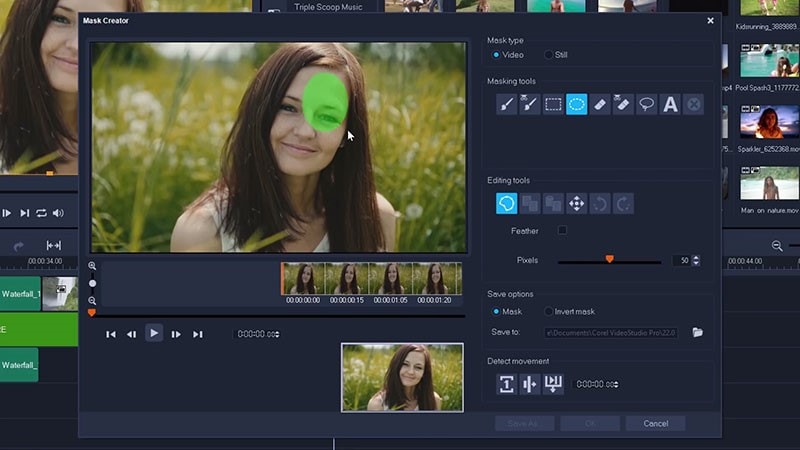 One of the boons of modern editing tools is that they allow you to make the unreal seem real enough by applying keyframes or motion tracking. 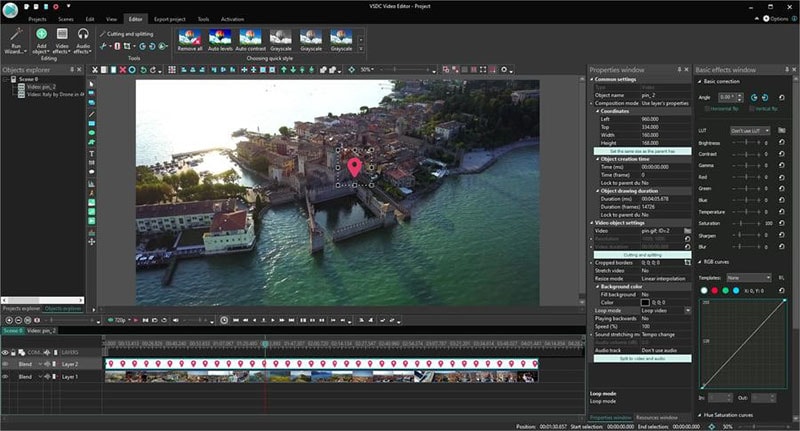 Part 2: Why These 10 Video Editors' Effects Could Catch Your Eyes?

No. 1 Adobe After Effects 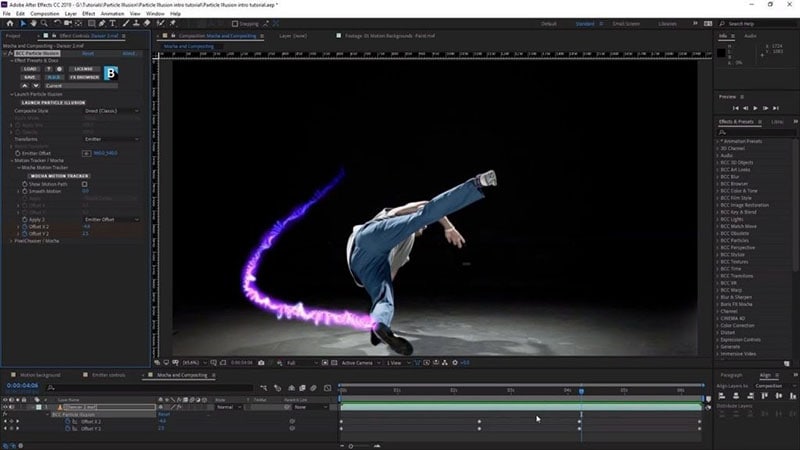 Adobe After Effects is almost three decades old. Since 1995 it is being used not only in productions of film but animation design & video game development. After Effects is a compositing application available on PCs & Mac. It has a library filled with visual effects & motion graphics. Plugins do not only contribute to better visual effects compilation but also improves core functionality. For a beginner they have compiled simple & yet detailed tutorials & courses. Even if you are a new user to the software at no point you are going to face difficulty at adopting a new editor. The entire package comes via easy & monthly subscription. 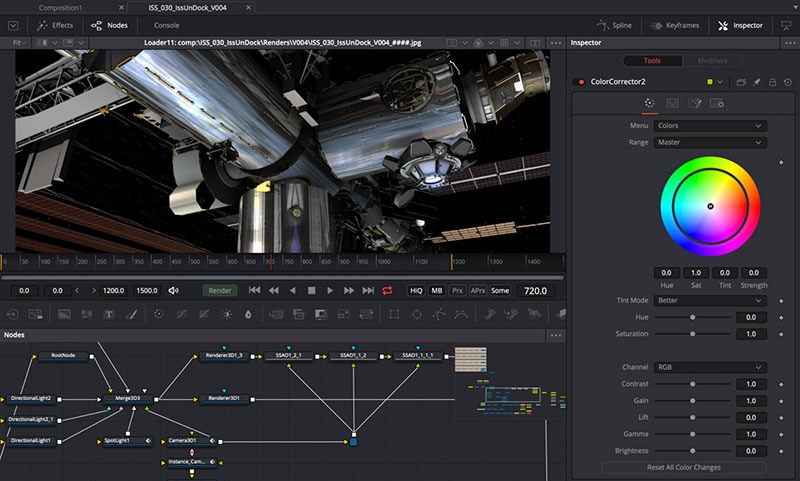 Blackmagic Fusion is popularly known as “the world’s most advanced compositing software for VFX artists.” In the past decade this software has been doing miracles in the field of cinema & television franchises such as Ant-man, The Hunger Games & Guardians of the Galaxy. Interface of fusion is a node-based system which smoothens the combining of different effects and makes it fun. Blackmagic Fusion supports editing in full 3D, split view for A/B testing, VR scenes & much more. You get watermark free editing software for the rest of your life only for 299 USD. 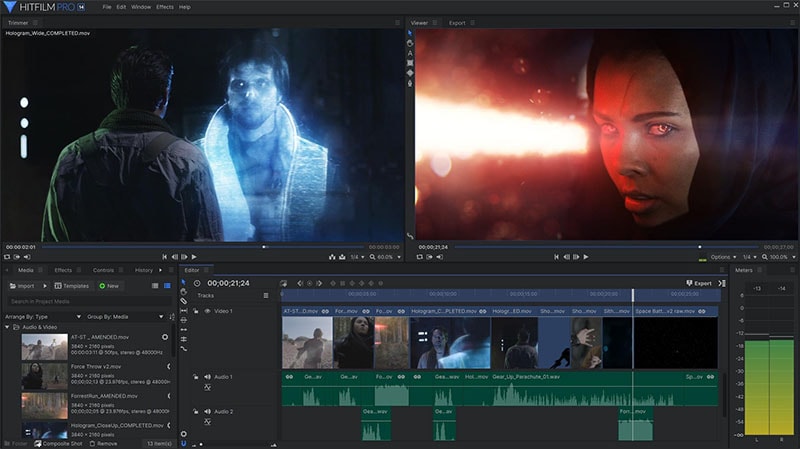 A non-linear alternative to After Effects that performs all primary functions like editing, compositing and VFX. Hitfilm is favored by filmmakers, Professionals & You Tubers all around the world. It supports 2D & 3D motion tracking, screen simulation & sky replacement capabilities. Its VFX comprises of 875 options which are fully equipped to fulfil all your editing needs. Powerful plugins, built-in video stabilizer and modified core functionality makes every mobile recorded clips look professionals. Pay one time and enjoy unlimited free updates for the rest of your life with Hitfilm.

The next software on the line is one that has given Premier Pro and Adobe a run for their money in terms of features, reliability and easy learning curve. It supports the aspirations of both casual and proficiently skilled filmmakers alike. It doesn’t share the added hassle of using an independent software for adding after effects to your video. You get 4K video support as well as 360° video view of your edits. You can indulge in experimenting from its jam packed effects library consisting of 3D text editing, enhanced lens correction. Though there is a lack of color grading and advanced stabilization features, it makes up for it with its variety of other options. 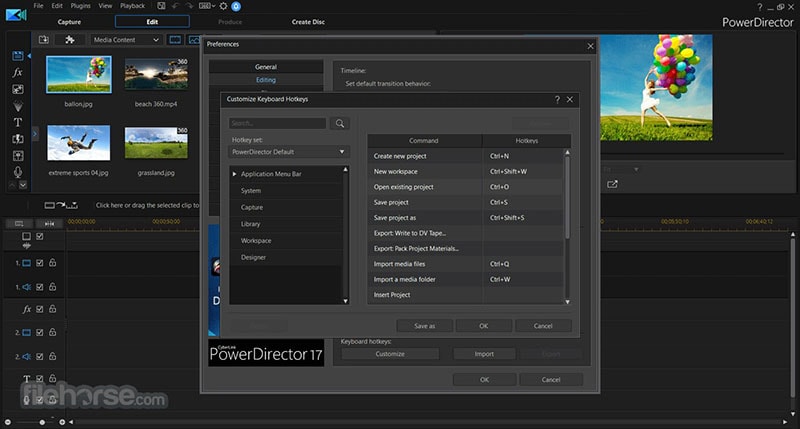 Cyberlink PowerDirectors is a powerful subscription based editing software with easy access to all its core professional video editing features. The software is primarily targeted to cater to “prosumers” or creative users who require reliable pro level editing without having to work at an actual studio. It hosts all the latest features such as colour matching, mask design and even sketch animation. Even so, PowerDirector is regularly updated and offers a gigantic collection music tracks, effects and titles to experiment with. It has a simple easy-to-learn interface with certain resemblances with Premier Pro and After Effects. 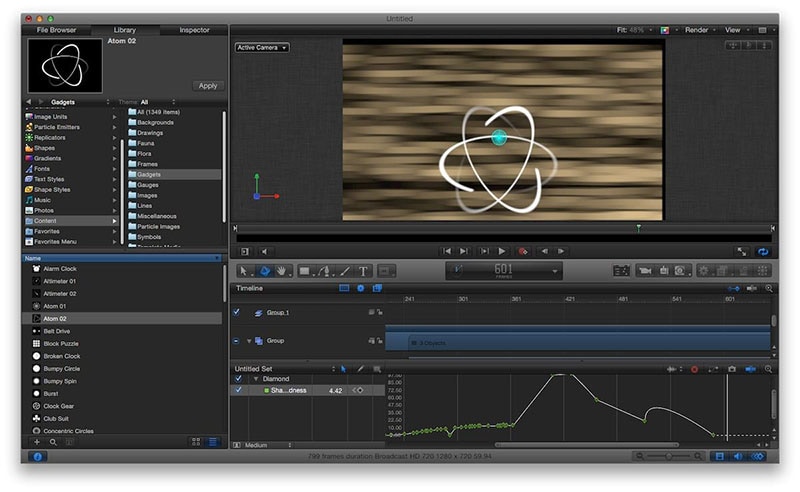 Apple Motion is the after-effects companion to Final Cut Pro for Mac users. It has a powerful and seamless interface with exceptional playback performance and output, when rendering. It gives you the opportunity to experiment with your creative skills when it comes to adding titles, transitions and visual effects. You can speculate the end result through real-time previews of applied animation without having to wait for them to get rendered. Although Apple Motion harbours 360° support, the software does have certain restrictions as all edits are done over a single timeline. 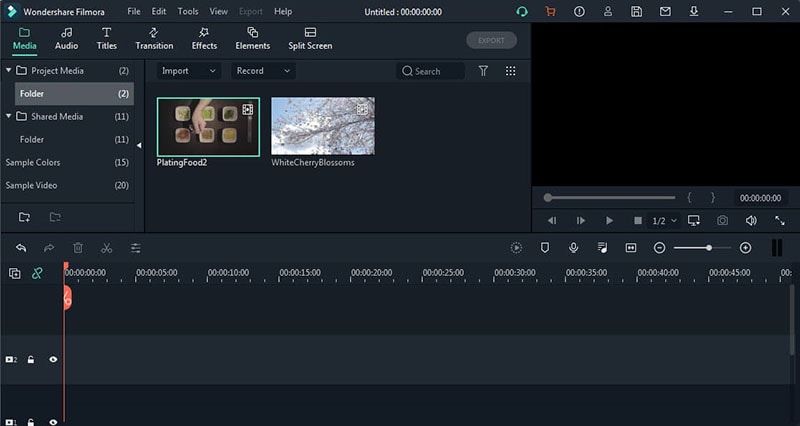 FilmoraPro has an exceptionally easy to use interface which impresses both advanced and intermediate users. You can indulge in non-linear editing with unlimited amount of audio visual tracks while having the liberty to choose from a superb open library of transitions, overlays, filters, titles and special effects. Filmora supports 4K video editing all the way up to 100FPS and you can also customize your resolution and fame rates. Filmmakers can access a host of features unique to Filmora such as auto colour correction, noise reduction and audio syncing. First time users can avail a one month free trial. 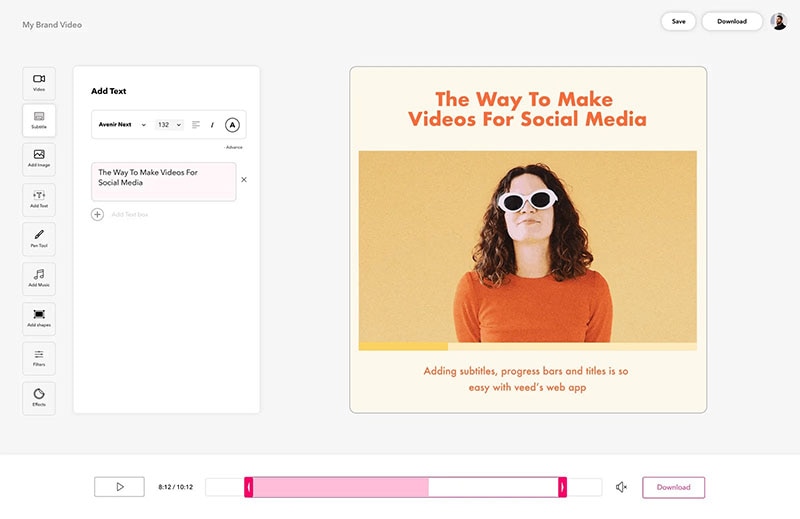 Price: Free to use.

VEED.IO is a special editing app for social media content creators that helps them save on time and money in the most fun way possible. Not only do you get to apply impressive features like VHS, Snow, Glitch, Snow, Black & White and other such cinematic effects, but also mix-up and stylize your videos as you please. VEED is a super convenient online editing software which is as easy as upload, edit and share. It can support dozens of file formats including MPEG, MP4, FLV, AVI and so on. You can restyle your previous work as well. 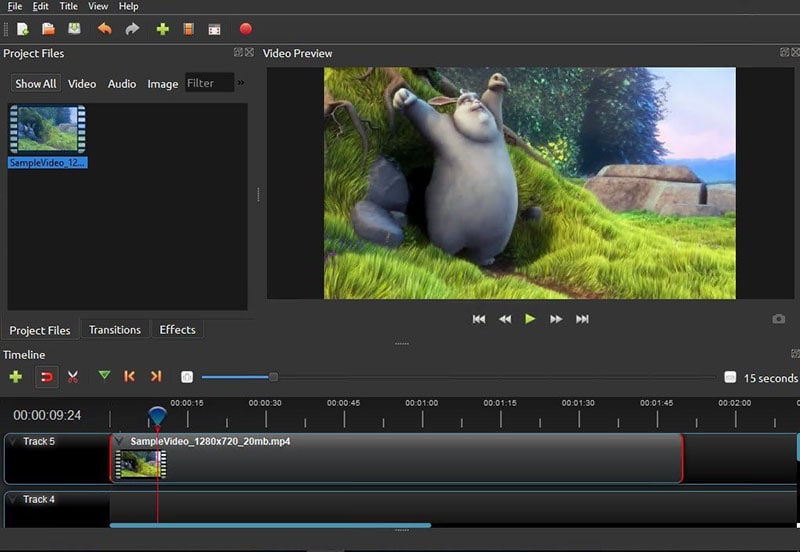 As we approach the end of our list, ease-of-use amongst our selection becomes even more competitive. OpenShot is most likely to be the simplest and easy to learn video editing application you would find. You would enjoy all the usual basic features of a basic editor along with exclusive features like video rotation which can be accessed by right clicking the menu option. You can also adjust the rate of rotation too. There are dozens of formats you can publish videos, audios and images in as well as a library of unlimited tracks and layers of every type. 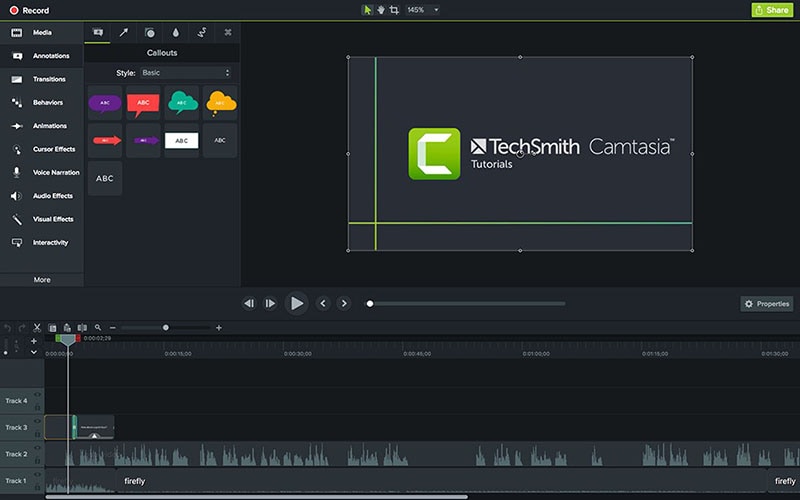 Nowadays, while the world is looking to shift its work culture online, screen sharing has become a huge influence in aiding that change. Today there are dozens of online courses, live-stream workshops and so on, where entrepreneurs, educators and vbloggers use screen sharing recording software like Camtasia. It is an all-in-one screen recording and editing tech that has a variety of useful features imbedded in a simple drag, drop and edit interface. You can utilize it’s on-screen keyboard as well as auto video/audio levelling features. It is quite efficient as an editor and has a downloadable app version as well.

● No two editing applications is the same and today you can avail dozens of online and downloadable video editing software that serves both advance and intermediate levels of editing. Iconic and cinematic video effects can have varying intensities of emotional impact on viewers. They give you unpanelled creative liberty and help you grow as a filmmaker, vblogger or business person.

● There are different categories of video effects available amongst video editors, each with its own application. You can mix and match combinations between transitions, video speed, composting, colour correction and certain degrees of animation. The video editors mentioned in this post have all had incredible usage reports but in the end their application can differ at different degrees.

● Not all of the programs mentioned are cross platform applicable, and some of them may be missing certain features that others don’t, therefore feel free to try each one out to see which one suits your needs the best. Keep a note of which video editing software suits you best in terms of its features, free source library, ease of use and learning, and of course budget. Ensure that you make the best of those free trial periods to familiarize yourself with your chosen video editor.

Don't Use a Blackboard Animation Video! (Until You Read This)

Create Blackboard Explainer videos that engage your audience through fun to watch creative animations using some of the best software of 2022.

Amazing Explainer Video Reviews You Need to Bookmark in 2021

If you are not sure about the benefits of explainer videos then you might consider checking for the reviews. So, let’s have a look at different video explainers reviews.