Meta Description: Have you ever seen how animators make animations? If not, try this character creator yourself and create interesting, animated characters.

Part 1: What Should You Do While Creating A Full Body Character?

As animation's functionality allows for innovation and engagement, it can play a vital part in making a movie or game engaging for the audience. You may think about numerous things while constructing a character that will make them appear more impulsive, spontaneous, and dynamic. Here are some pointers to keep in mind when creating a full-body character using a character creator app:

Counter the Gravity of your Character

You should keep your character's center of gravity in mind when you create them. Gravity will determine the animation's walking and running movements and its proper balance. The character's mass must be created so that it does not interfere with the gravitational pull.

When creating a character, take a glance around and gain some ideas from the people around you; how they walk and talk in a certain way. Their facial expressions should match their voices so that the scene in the movie or game looks authentic.

Adjust the Movements of Character with Time

To create depth in the scenario, a character's facial expressions, lips, and physical movements must all be on time and in sync. Otherwise, the lag between the two things would make it appear sloppy, and the viewers will be dissatisfied.

Keep the Poses and Actions Flexible

Make the character's moves, limb movements, and stances as flexible as possible to appear lifelike, and people enjoy watching it. Arms, legs, and mouth motions should all sync with the position.

Any animation is inadequate and unnatural without facial expressions. Focus on the lips and eyes because these two features accentuate a character's features. The expressions on the face should be clear.

Plan According to the Character

Planning allows you to organize your thoughts and ideas to carry them out properly. So, if you're creating a character, plan out the actions, gestures, and emotions ahead of time and devote enough time to each one.

If you're an animator, you know how difficult it is to create fresh characters and give them a lifelike feel. Wondershare Anireelis a character creator app that is useful in various ways and allows you to make unique animations. Anireel assists with content or video creation for marketing, sales, training sessions, and business communications.

This full-body character creator contains dozens of new useful options for creating unique animations. Numerous options are available in the advanced editing feature to help you create great 2D animations. You may use it to design a full character, give it a gender, and give your animation movement. Converting text into a voice-over and adding colorful clothing to the character and appealing face features can help you generate engaging content.

The following section guides you on how you can create a full-body character by using Anireel. This character creator is fully functional and loaded with amazing options for you to choose from and create a new character out of it. Here’s a step-by-step guide for you:

To start the process of animation creation, you have to download Wondershare Anireel on your computer. After you've downloaded and launched the character creator app, look for "New Project" displayed on the main window with a plus symbol. Start by clicking "New Project." 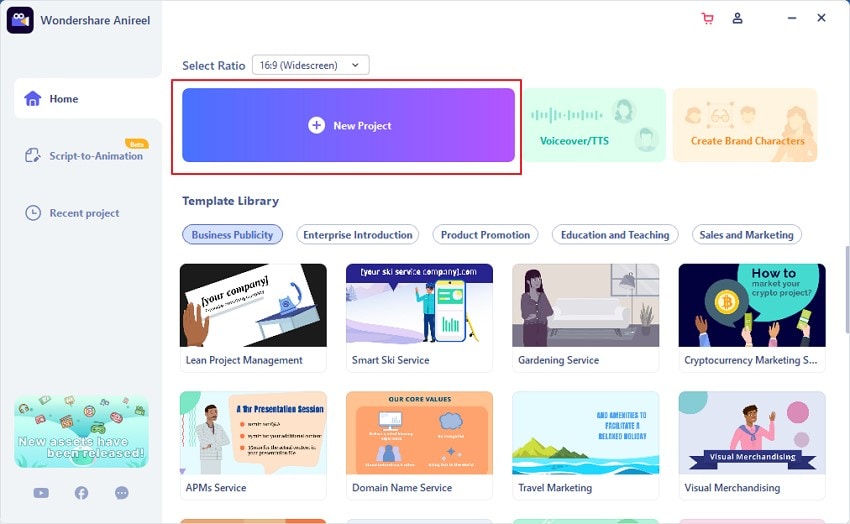 On the left side of the screen, you will find the option “Characters”; tap on it. Following this, click "Create Character." 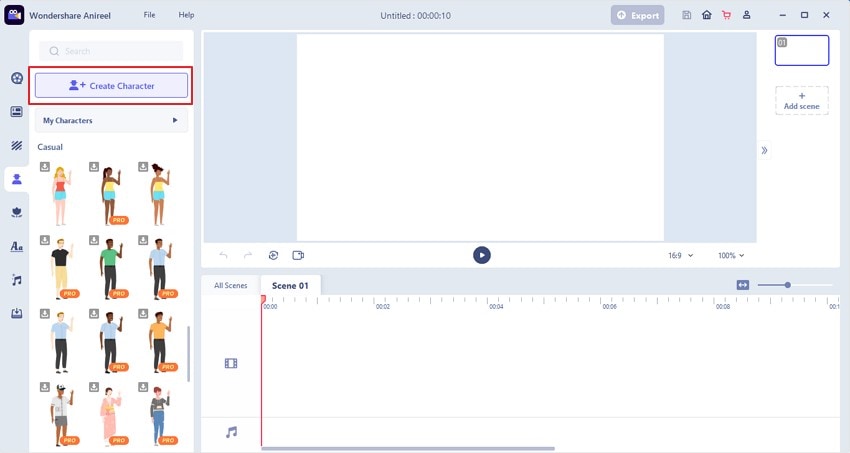 Step 3: Assign a Gender to Your Character

The screen will appear with an option of gender. You can choose according to your idea of creating animation and assign it a body type. The “Preset” option will help you choose the style of your character. 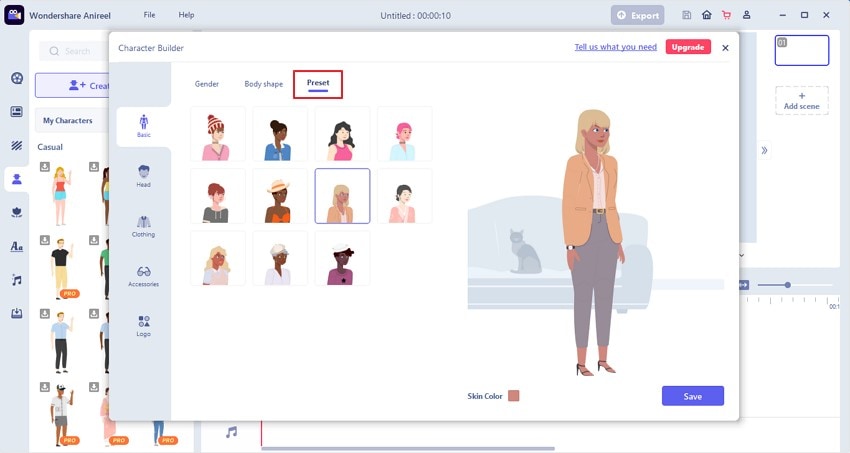 Move further and tap “Head” to give some expressions and features to your character. You have a wide range of options to choose from, for instance, face, eyes, nose, mouth, etc. The skin color of the character can be changed as well. 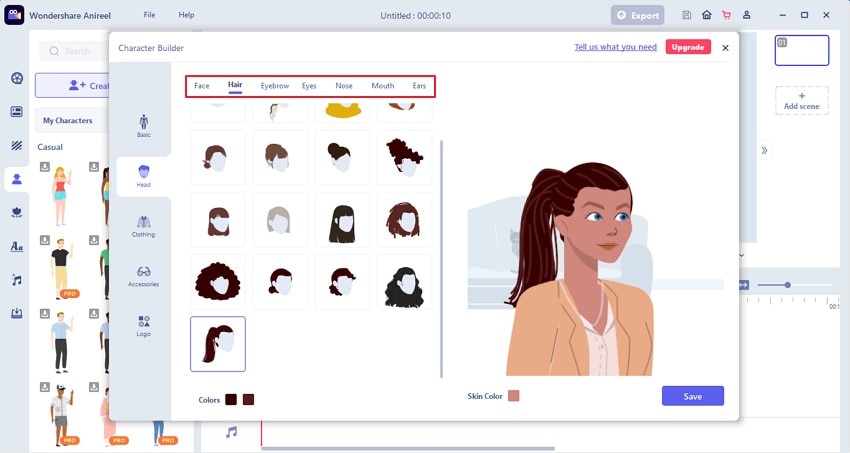 The "Clothing" option allows you to customize your character from head to toe by selecting from categories such as "Outfits," "Bottoms," and "Footwear." You can also customize your avatar with jewelry, headgear, glasses, etc., from the "Accessories" tab. 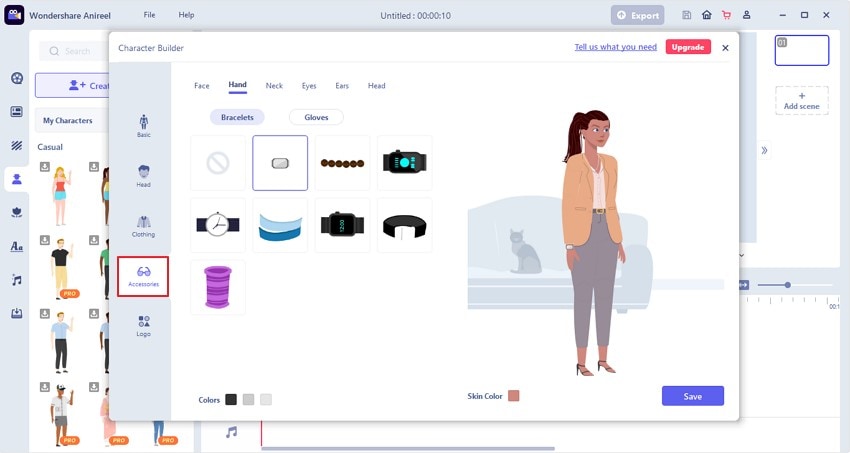 Step 6: Add Logo and Save Your Character

Once done with all steps, you can add a logo of your brand or any other by importing it. Click “Save” and name your character as per your liking and save it. It is ready to be used. 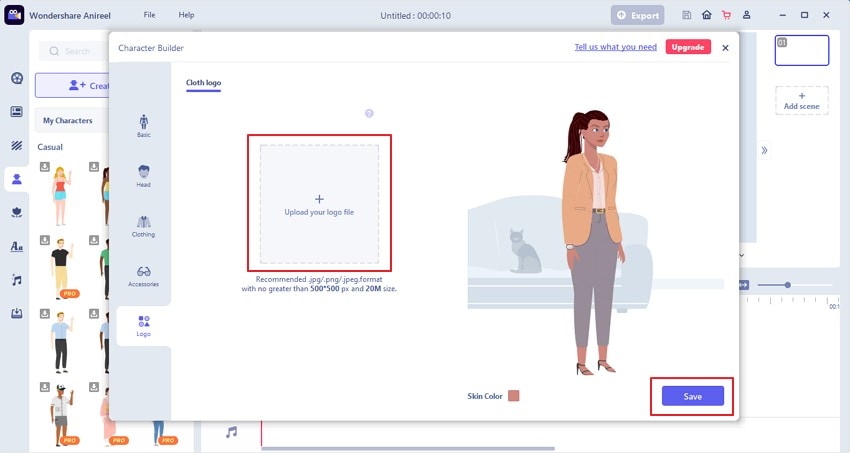 In the above portion of the article, we have discussed how to make a full-body character by using a character creator. Now we will discuss some tips that you can use to make an animated video with the help of Anireel:

Storyline and characters are two things that go simultaneously, so when you are making a character, keep the storyline in your mind.

Emotions and expressions define a story really well in a video, so work on the facial expressions while creating a character.

It brings fantasy and fun to the videos when characters are assigned actions and different movements. Keep them simple and real so that it looks lifelike.

Mute the Sound for Better Feel

When you add actions to the animation, you can check how they look and the intensity of actions by muting the sound. This will help you decide more conveniently.

In this article, we have discussed how important is a character for a video and how you can create them using Anireel. Anireel is an amazing full-body character creator that you can use to design a character and edit videos. There are a few tips for you to follow that will come in handy when using characters in videos.