Meta Description: Are you interested in character building and editing for work purposes? This article presents the best character creator tools and guides you on how to make your cartoon character perfect.

Using a character creator tool to endorse your brand’s message is the best marketing gimmick. It presents your business concept and brings visual fun to the audience all over the world. If your audience primarily targets children, then creating distinct and attractive characters will really give fame to your created cartoon characters.

It will help you draw attention to your product. Moreover, the interest rate in the customer’s mind will also be raised. Teachers can also use this way to attract the toddlers and make them grasp the concept of any topic. We will recognize the following content in the article and learn about different ways to create a perfect cartoon character.

Part 1: What to Find in a Perfect Cartoon Character?

When you think of any popular cartoon character, you will recognize them as soon as you see them on screen. It is due to their distinct features, like their hair, clothing, makeup, etc., which make them unforgettable. Moreover, an easily recognizable character can be used on various platforms to sell different products.

If you want your relative audience to acknowledge the cartoon character and consider the message being delivered, the character should be attractive and likable. Even the bad characters also have an impact and considerable features to which the audience can relate. The characters should portray some ideals and morals so that the people can like the characters.

Different and attractive colors make the cartoon characters memorable for the audience. Think of Hulk and Shrek; they are identified for their green color. If your cartoon character has a different color, it will be memorized by the people. The built character will have defining traits, and it will make them unique.

If you are a big brand that wants to publish their message on a bigger screen, then you should use Powtoon and bring life to the cartoon characters. Powtoon helps in customizing the cartoon characters with different clothing combinations, skin colors, makeovers, accessories, body shapes, and hairstyles.

There are almost 35 different expressions and poses that you can utilize and make exciting characters for your brand. With Powtoon character creator, you can focus on creating diverse and highly influential characters to endorse your message and brand.

Animaker is another best 2D animation software that builds attractive cartoon characters with a simple and easy process. There are tons of facial features available at Animaker and attractive accessories. The auto lip-sync in Animaker enables matching the character's lip movements along with the voiceover.

Animaker has the biggest library that consists of properties, backgrounds, music tracks, and built-in texts that you can import into your videos and any other creation with Animaker.

Wondershare Anireel is a powerful 2D character creator tool that assists effortlessly in making cartoon characters and animated videos for advertising, knowledge sharing, and eLearning. With the assistance of Anireel, you can convert the script to animation with just a click. The character builder feature of Anireel enables in development of a character with skin tone, shape, and features of your choice.

The "Deep Learning Technology" of Anireel helps in turning the script into voices and tones. This way, you can make your character sound the way you wish. The customizable assets of Anireel include drag and drop characters, text, props, and audio assets. You can customize the anime characters, add your logo image, and create a unique IP character for your animation video.

Launch the Wondershare Anireel on your device and click on the "New Project" option. A new window will be opened. Now, select the "Character" icon mentioned on the left side. After that, tap on the "Create Character" button to build your own character. 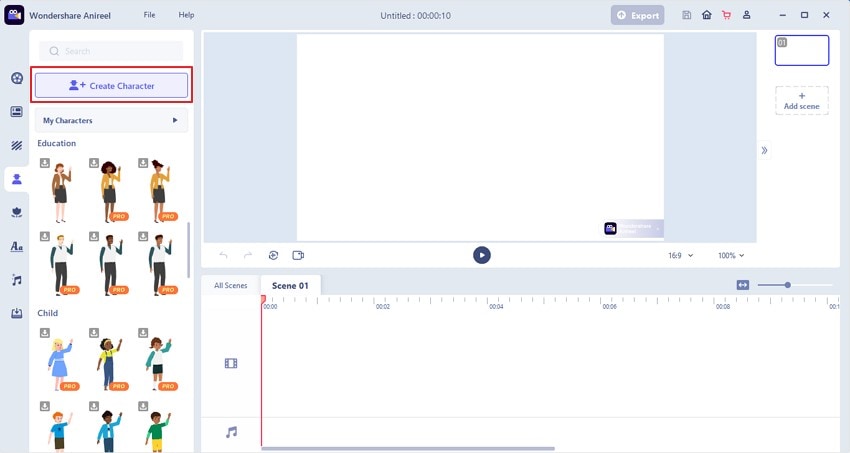 The main interface will show the "Gender" option on your screen automatically. Now, select the gender and body shape from the three given options, and character preset accordingly. 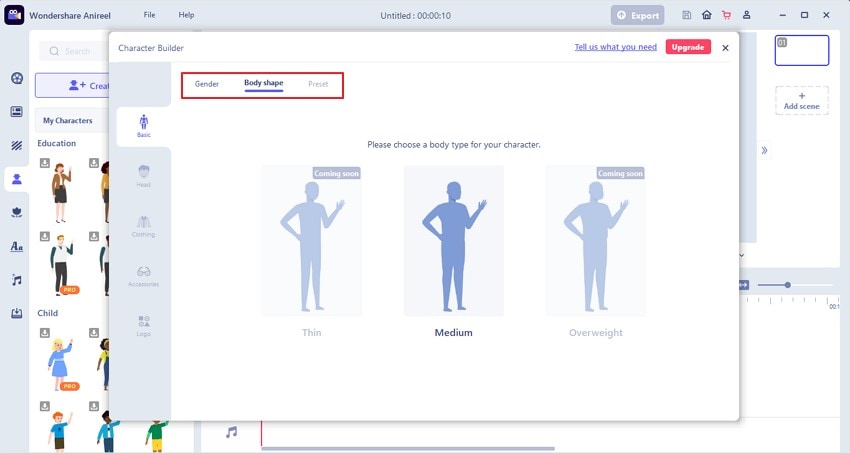 Now, it's time to build the facial features of your character to make it look captivating. Go to the tab of "Head" and start decorating your character with suitable skin color and hairstyles. Set the face of your character by deciding its eyes, eyebrows, shape, nose, ears, jawline, mouth, etc. 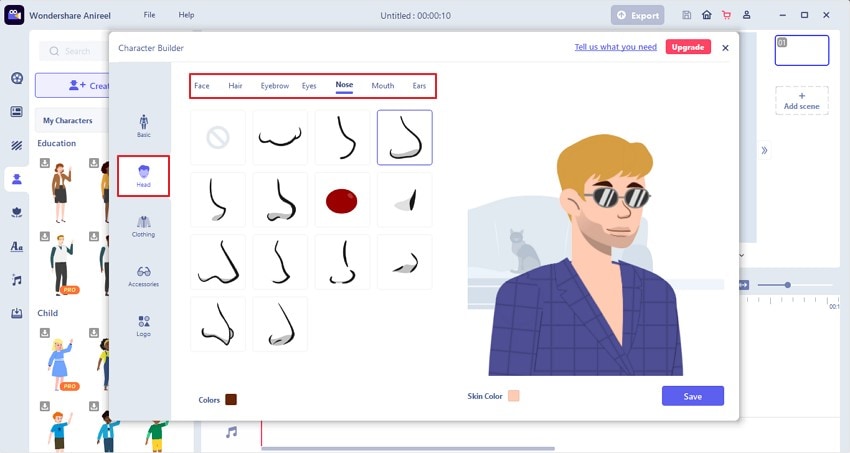 Step 4: Pick the Clothing and Accessories

There will be a tab for "Clothing." Click on it and choose the outfit for your character, including the base layer, top wear, footwear, and bottoms. The "Accessories" tab will show the jewelry for the ears, neck, hands, eyes, and head. 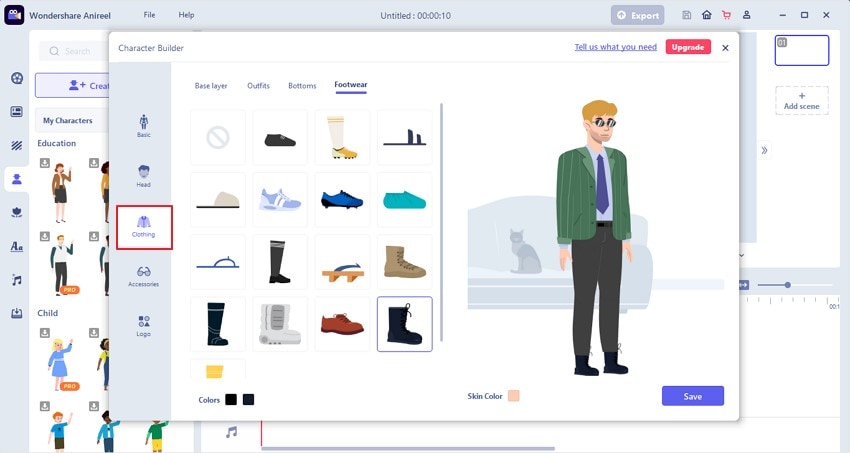 You can also choose to add the logo of the brand by importing the logo file and adjusting it on the character. After completing the editing, tap on the "Save" button. Name the character, and now, you can apply it to the animated videos. 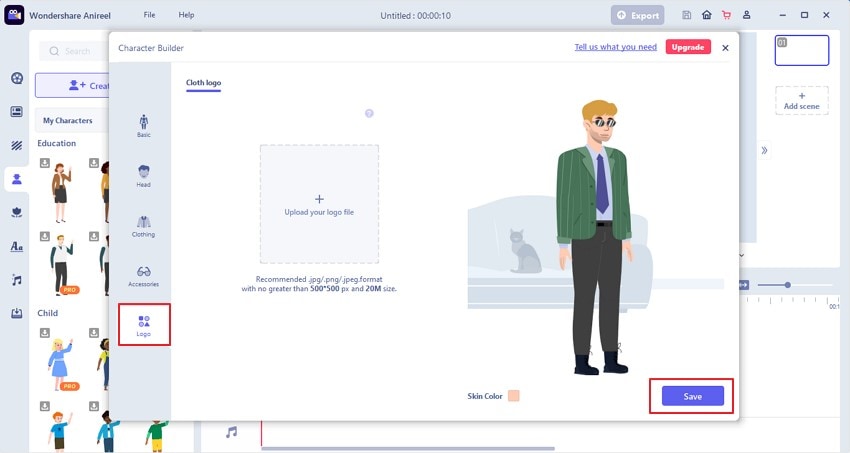