Voice Your Own Cartoon Character With Character Generator

Meta Description: Do you want to bring life to your cartoon characters by giving them a voice? Read this piece of writing to learn about the powerful voice character generator.

Voiceovers in animated videos are an integral part as they target the audience by explaining the topic audibly. If your cartoon characters lack voices, you won't be able to engage the audience effectively, and there will always be room left for impressive communication.

Part 1: Benefits of Using an Efficient Character Generator for Adding Voice to Characters

Voiceovers in animated videos should have the diversity and ability to adjust according to the scenario. A natural touch in your cartoon characters is not possible without giving them variations in their tone. So, a cartoon character generator should have an option to change the tone and frequency to adjust it with the current situation naturally.

Do you know that directing your message to the target audience is the most difficult job in marketing? However, with perfect voiceover, you can persuade your audience easily. While using your selected character generator, you should be able to change its speed and language easily.

Many voice generator characters give the option to choose gender before giving voices to the characters. By selecting gender, you can easily give distinct voices to your cartoon characters by giving them identification and personality.

Brings Life to Your Video

The basic purpose of animated videos is to engage the audience and capture their attention. Make sure that your cartoon character generator free has the feature of lip-syncing to synchronize the dialogues with the lip's movement. Hence, you can bring life to your characters by perfect coordination with the dialogues.

Ability of Converting Text to Speech

Text to speech is a powerful feature that every character generator should include. By using text to speech feature, your character can speak the added text instantly, and you can also modify their pitch and sound style. Thus, it will save your time, and your character will communicate with the audience on your behalf.

Are you excited to add voices to cartoon characters to engage the viewers? useWondershare Anireel as the trustworthy software which stands out as the powerful cartoon character voice generator in the market.

This tool has an extremely friendly and organized user interface so that non-technical individuals can easily edit their animated videos by adding voiceovers to them. Moreover, it is capable of generating outputs instantly without interrupting users with constant ads. 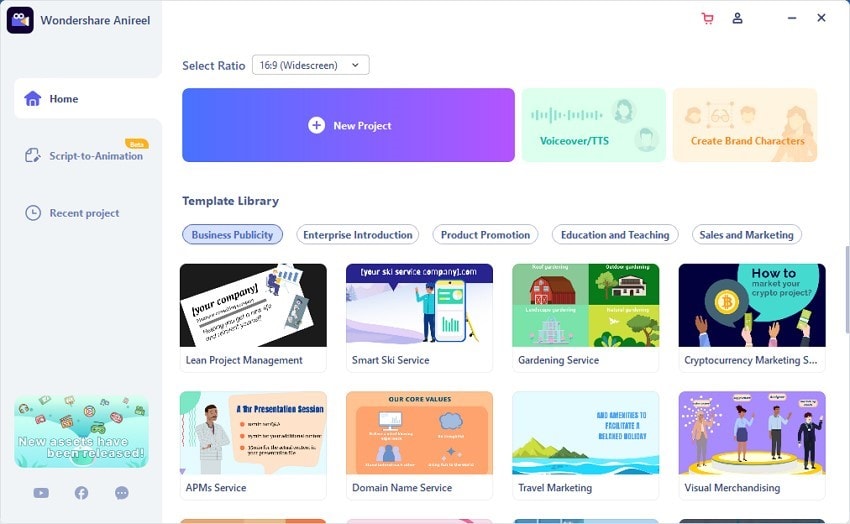 •Script to Animation: This tool has a special feature of converting scripts to voiceovers instantly. You can either use their script templates to begin or can import script files. Thus, you can save time, and the tool will automatically convert the script quickly.

•Text to Speech:This platform utilizes AI sound processing in which you can convert the text to speech with a few clicks. Just by entering text manually, you can select the voiceover of your choice and can change its speed and pitch accordingly.

•Character Builder:Apart from adding voices to cartoon characters, you can also create your own customized character by picking their outfits, gender, accessories, and props.

2.2. Steps to Focus On When Adding Voices to Your Cartoon Characters

In this part, we will provide you with an authentic guide to add voices to your cartoon characters through Wondershare Anireel easily. The process for adding voices through this cartoon character voice generator is not lengthy and complicated. Thus, you can begin editing your animated video anytime you want with their friendly user interface.

Launch Wondershare Anireel on your desktop and open its main interface. Now click on the option of “Voiceover/TTS” from the main window. 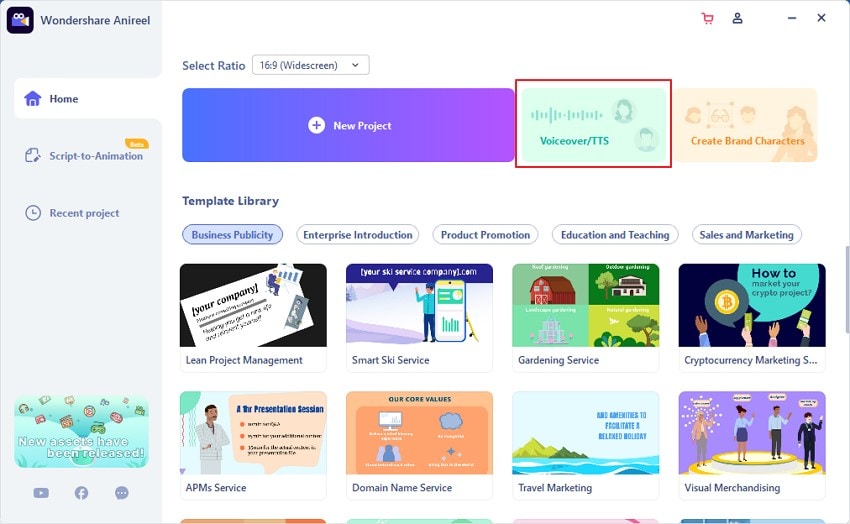 On the displayed window of voiceover, select the language in which you want to add voiceover. Afterward, add text in the given box manually and select the gender to generate a voiceover. You can pick and choose from various options of voice sound given on the screen. Also, adjust the pitch and speed of the voiceover accordingly. 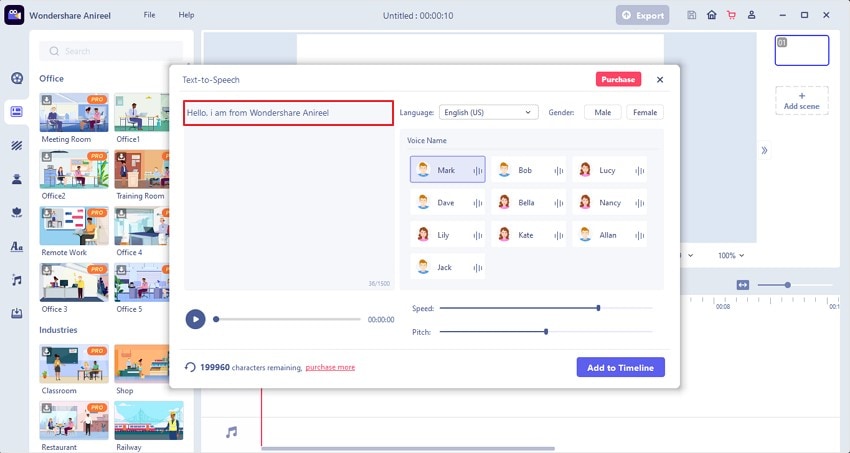 Once done with the previous steps, click on “Add to Timeline” to proceed further. Now click on the tab of “Character” from the left section. You can either generate a new character or can use the pre-made character. Select the character and its pose and then drag and drop it to the preview window. 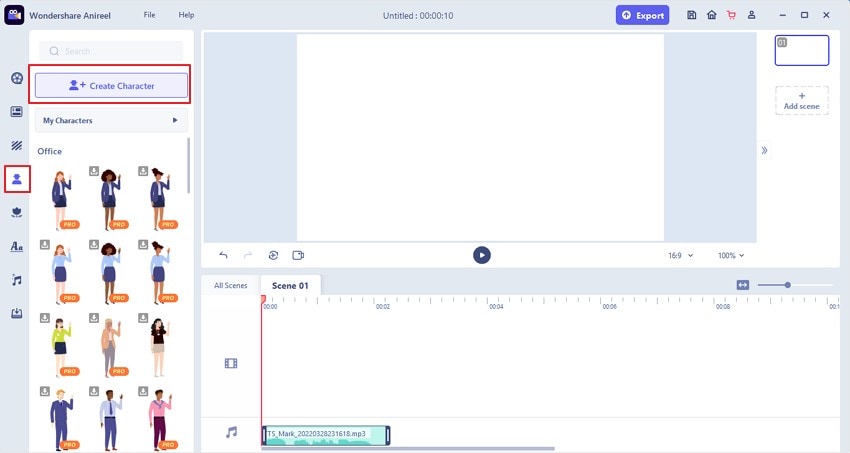 Tap on your selected character and click on the icon of "Lip-Sync." Now match the audios of your character from the dialog box. You can also add the number of audios for your character to speak. Afterward, select the “TTS Audio" from the drop-down menu to voice to your character, and it will automatically speak the added text. Now click on "Export" to download the file on your computer. 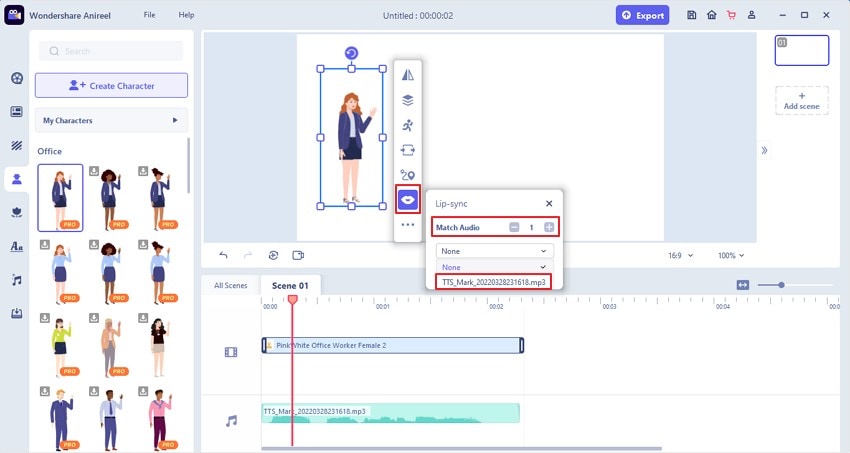 In your animated videos, your targeted audience cannot relate to the cartoon characters unless they communicate through appropriate voices. To bring life to your cartoon characters and engagement with the viewers, trustWondershare Anireel as an amazing cartoon character voice generator. This tool has various options to add voiceovers to your characters through simple and easy steps.