Which These Storyboard Templates Deserve to Use More Than Once?

This article mentioned different types of Storyboard Templates and their uses. This article will tell you everything you need to know to get started with using storyboard templates.

A storyboard is a graphic layout with images and narratives in a sequence to tell a visual story. Storyboards are great for presenting information (Visually). You can explain a complicated easily through storyboards.

Storyboard templates are effective in showing the passage of time. Many industries are using storyboards nowadays.

01 Some Significant Industries That Are Using Storyboards
02 Some Good Storyboarding Software's Which Are Free
03 Six Type of Storyboard Templates Immediately Reverse the Dilemma of Your Zero Inspiration
04 How Can We Combine Storyboard with Animation?

Part 1 Some Significant Industries That Are Using Storyboards

Film and Entertainment industry was the first industry that used storyboards, and they are still using storyboards. It becomes easy to plan camera angles, actors, effects, etc., through storyboarding before filming.

Information can be conveyed easily through stories. People can connect with stories and can grasp information quickly from stories. Everyone has a different perspective about the same thing.

Part 2 Some Good Storyboarding Software's Which Are Free 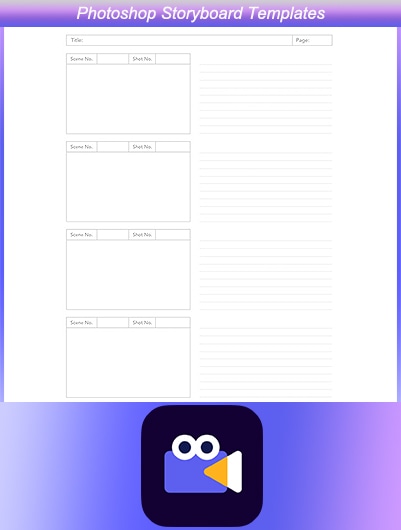 A Microsoft Word storyboard template is a graphic layout with images and illustrations arranged in a sequence inside Microsoft Word. Their principal aim is to tell a visual story. They are generally used for motion pictures, television, animation, and commercials.

Part 3 How Can We Combine Storyboard with Animation?

Some things to keep in mind while writing a storyboard:

● Always remember to write captions beneath the drawing.

● Colouring the objects to make them stand out is a great idea.

● You should always choose your storyboard template carefully. Always try to choose a template according to the story.

If you have a script and want to turn it into animation, Wondershare Aniree can help you. Anireel is an animated video editing software with outstanding animated elements and scenes.

How can Anireel help you to turn your script into animation?

● Anireel has lots of storyboard templates.

● Anireel will create a storyboard template and also rich animated scenes that match your script.

● You can also import pictures,videos and Anireel will animate them.

● Anireel will convert the text into a voice-over.

● A writer can plan scenes to match the outline of the story.

● A web developer can use it for illustrating a JavaScript function on a page.

● A student can use it for analysing characters and complex processes.

● As you can see, storyboards can be very useful. But the most important use of storyboard templates remains film making.