Your Step by Step Guide to Storyboard

An animated storyboard has become the backbone of a successful film or video amid tough competition. So, let's take a step-by-step guide to the storyboard.

At the present time, almost every second individual is dreaming of making a video but has not succeeded. This is because they don't have the required skills and knowledge of video storyboard. 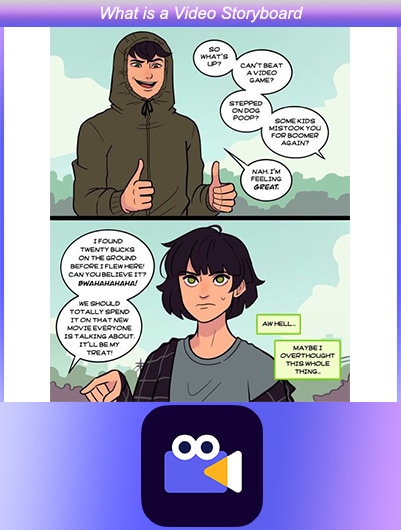 Wondering what is a video storyboard? It is a medium from which you feature your script to screen in an effective manner. Though the journey is arduous, let's see how to make this arduous journey easy and simple.

Part 1 What is a Storyboard? The Fundamentals to Get You Started

Vlogging is one of the trending professions in today's era. From teenagers to adults, people are keen to do vlogging. Due to this, there is a die-hard competition. Everyone wants to make their video perfect, engaging, and luring.

To do so, professionals and smart vloggers make storyboards before shooting the desired video. You might hear the ‘storyboard' word first time or hear it often but don't know about it. A storyboard is a graphical representation of your video defining the storyline of the video in graphical form, shot by shot.

A storyboard helps you and others to understand the story, ideas, camera angles and shots you want to incorporate in your video. Based on the storyboard, you can take others' advice and make your video flawless. 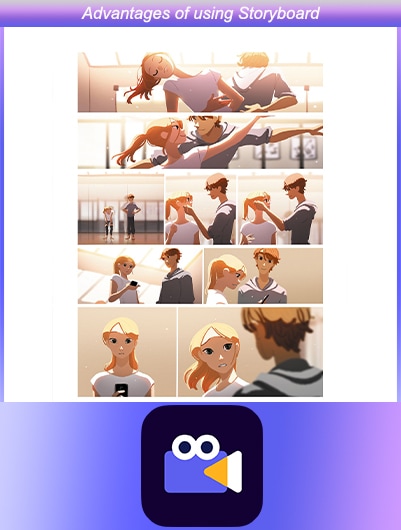 Here are the few advantages that will induce you to do so:

● Take your video to next level

● A perfect way to defines your vision to others

❶ We have shortlisted a scene from a short film called 'The Pen' to demonstrate the most common scene of a film.

The above is a shower scene where you can see that how each shot and camera angle is demonstrated beautifully. Thus, you don't have to describe any scene verbally while having a video storyboard like this.

❸ If you want to share your vision and ideas quickly without investing much time, then the below example is perfect for you.

This is an example from Moulin Rouge where small details are enough to give the gist of a scene.

Part 2 How to Turn a Script into a Storyboard?

How to Turn a Script into a Storyboard?

There are the following ways to guide you on how to do it:

Before working on the storyboard, you need to work a little bit on your script so that you don't have to face any problem while making a video storyboard. Break the script into smaller parts then draw each important part in a creative way.

Create blank panels in a grid format and insert each prominent action in it. This way things will be crystal clear and easy to comprehend. You don't need to bother for templates or struggling to find it. You will get innumerable of them over internet.

Drawing is the major and most significant part of a storyboard. It is the way that allows you to express your ideas and creativity in visual forms. Your sketching should include all things like characters, shots, angles, and camera movements.

Feedback is important to know whether you are going right or not. Getting feedback from professionals means you may get something precious that may complete an incomplete idea, or their feedback may help you to weed out something irrelevant.

Revising your script and storyboard is an essential part. It helps to remove your silly errors. It is the last step before heading for production. So, instead of taking it as a boring and lethargy concept take it seriously and do it in an adventurous and enjoyable way.

If you are looking for the one and didn't get yet, then give a shot to Wondershare Aniree. Anireel is an effortless animated video editing software with rich animated elements and scenes. It has marvelous and valuable features which do not help you to make a video storyboard but also take it to the next level. Its top listed features are as follows:

● Include Layout to distinguish every shot.

● Include page numbers to maintain the story sequence.

● Use the best editing software like Anireel to make your storyboard perfect, engaging, and appealing.