Write voice acting scripts? Here's the Best Way to Deal with It

Voice Acting Scripts provide the color and structure to all video presentations. It adds emotions to the context which helps the message make its way through to the audience.

Voice actors and voice acting scripts are closely entwined which is felt through keyword emphasis, tone modulation and the right pauses at the right moments. Here we take a look at all that goes in to making the Best Voice Acting Scripts.

Part 1 How Many Types of Voice Acting Scripts Do You Know?

The types of Voice Actor Scripts you could use for your videos are too vast in numbers so let's simplify them a bit. You can divide scripted videos with voice overs into two basic categories – Commercial Scripts and Non-Commercial Scripts. 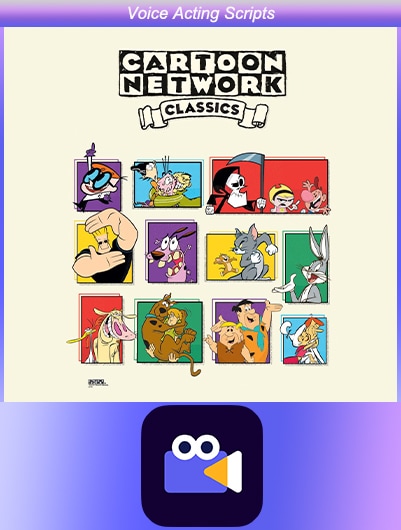 Most actively used in commercials, radio intermissions, or online advertisements. These scripts are short and to the point which makes them brisk and on the face.

Let's not mistake them for free and easy to make scripts. Non-commercial scripts are more comprehensive and are meant for a more engaging audience. People who listen to these types of voice over scripts are usually in search of information such as A/V presentations, research, e-learning and so on.

Now, the rest other categories of voice over work goes into more specific niche based ‘types', like the ones mentioned below;

For ages, (or maybe just a few years) the Video Game industry has been a great source of Voice Over work. This genre is highly creative as it roots the player in the feet of the protagonist, so that he/she can immerse themselves into the narrative.

People these days are having lesser time in hand to relax and read their favourite books, hence audiobooks are largely gaining attention. It is an interesting way to listen to the book in the voice of other actors.

This particular format of video scripts are relatively new, and is perceived as a simpler and fresh angle to explainer videos. These videos utilize info graphic slides, animated characters and presentations to convey information.

Humans respond to well, humans. While Siri and Cortana has almost become the equivalent of legends in this arena, there are new virtual assistant services and GPS voice over apps coming online every day.

Education material is relevant to both commercial and non-commercial videos. In light of the global pandemic, people are more inclined towards dedicating their daily time to learning something new.

Advertorials and commercial voice over scripts are primarily focused on conveying a message. On most occasions, these voice overs are seen in product intros, company announcements and so on.

Voice Acting Scripts are used in almost any video medium. Their approach might vary depending the type of script. There needs to be a flow and pacing in the voice actor's voice to add dramatic elements while making it sound clear and natural. The tone of conversation may vary between one-sided and most engaging, depending on the type of script. Here are some pointers to understand writing a voice acting script more fluently.

√  Short Sentences Are Easy To Enunciate

This seems pretty elementary but has more importance rooted in it. With your script written in shorter and more precise sentences, voice actors would be able to read and understand lines quicker without fumbling while recording.

In a voice over script, each word written has a purpose behind it. You need to be specifically clear on what idea are you trying to convey through your script.

We interact differently with different people so it is only natural that the tone would vary depending on your audience. Have a clear idea of who your voice actor would be addressing through the script.

Ever wonder how tone of every individual gives us an idea of who you are? Whether you are writing a script to endorse a product or to convey some specific information, you need to have a persona which people can trust over being an authority over what you are saying.

A well written voice script may take days to finalise which is why Wondershare Aniree is here to speed up the process.

Anireel is an animated video editing software but has dozens of features which is useful for great voice actor script editing. You can choose from any of Anireel's script editing templates which are viable for a plethora of script genres.

● Voice Acting Scripts have made their place in the rapidly growing digital economy.

● Anireel is an exceptional animated video editing script which helps speed up the process of writing a voice over script.