How to Write an Engaging Video Explainer Script Step by Step?

Explainer videos are now serving as the best way to promote the products and services by businesses. As these are interactive and informative videos, they have the capability to catch the attention of a wide audience as compared to other modes of promotion. To make an explainer video, a strong and engaging script is the key. So, it is essential to know the tips to write an engaging script.

In addition, you can incorporate animation, icons, graphs, statistics and many other features to make your brand more compelling. This will help the viewers to grasp the idea of your business and judge for themselves within a couple of minutes or even less. Making a vivified explainer video has never been this simple. However, if you don’t know how to create video explainer script, the below discussed steps can help you in make an engaging explainer video script for free.

● What will be the main idea of your explainer video?

● How is your product and services different from other alternates?

● What branding elements characterize your brand?

● What will the next step of viewers after watching your explainer video?

The main and only reason behind the success of videos is a good story. For writing any type of explainer video script, everyone always follows the same pattern as first the problem, solution, working and at last, call to action. People always love to see videos which have storytelling that’s why it is best to explain them about your brand in the form of story so that they can understand what you are offering very well and is it helpful for them or not.

If you tell a story to your viewers and include your product in it as one of the props then it will not look like a direct promotion and will easily encourage the viewers to put their eyes and ears on that. Also, keep this in mind that your story should be simple not condescend. When you are building up the story it is also important to be very careful while choosing the protagonists. Choosing the right protagonist will help you in building instant empathy with the viewer and allow them to feel that they are using the project at present time. It will be beneficial for you to display people of races and gender. Always make your script interesting, engaging and easy to digest for everyone. For making the script like this, you have to write the outline of your story in not more than five sentences in simple words. By this way of storytelling, you can easily convince your audience to buy your product or to take your services. These three points should definitely be included in your story.

● The story should be created in a way that viewers can relate themselves with that.

● Create a story that shows any type of problem

● Solve that problem with the help of your product and services

Keep the length of your script short as lengthy scripts might get boring at some point and also lose track of the goal. When you are deciding the length of your script then always keep the target audience in your mind. When your target audience gets to know about your brand for the first time, they will not see your content more than 1 minute and that 1 minute also depends on how compelling your content or material is, whether they have the requirement of your brand’s products and services or not.

You can balance this by keeping the word count in mind as for one minute of video your word count should not be more than 150 to 160 words. While deciding the length of your script you also have to check the narration time of your script by reading it on your own in a properly paced voice.

4. Keep the tone and language appropriate

The language and tone of the script of explainer video should always be consistent. For choosing the correct words and tones, it is very important to first decide what is the main purpose of your script, who is your target audience and in what way you will be going to deliver it. Language and tone are the key elements of your script so always emphasize them while writing the script. Imagine real people as characters so that you write a more realistic script. You should choose the words and tone that will create an imaginary picture of your content in viewers mind. Always include the words and tone in the script that can easily be read by the voiceover.

5. Add emotions in your script

If you want to engage your audience in your brand from the beginning then add emotions in your script. For adding an emotional touch to your explainer video script, write a story related to your products and services in a conversational tone, simple language using an emotional communication tool. Also, keep in mind that adding emotions does not make the story very serious so that viewers can get easily establish a connection. It is not a movie script, you are writing this for promoting something so here adding emotion means something that viewers can connect with from inside.

While watching the video, most of the time, the viewers get distracted as they start thinking about something else. To bring the viewers into the story in one or the other way so that they do not get distracted and to influence them fast, it is important to engage them into the story. You can do this, by speaking directly to them means write a script in second person voice and try to use the language which they understand the most and also raise questions in between which tend the viewers to contact you.

If you want the viewers to enjoy while watching your explainer video then try to write a humorous script. It is a great way of connecting with the audience and also to show that your brand has a unique personality. Although Humorous script is not the only way to engage your audience towards your brand but it is definitely a viable solution to overcome the promotional explainer video stigma. Writing humorous script for the explainer video is also not an easy task as it requires a lot of consideration so that you don’t go overboard. You can use sarcasm or exaggeration to make your script humorous.

If you want to show your audience how approachable and caring your product is make sure to use a kind and helpful tone when writing the explainer video script. Friendly script brings human touch to your explainer video as they are highly expressive and informal. To connect with the viewers personally now most of the companies are using this friendly tone script writing method. If you write the script for your explainer video in friendly tone then it doesn’t means that your content is poor and don’t have any real value. Friendly or conversational tone establishes a conversation between your business and customers. When they listen to the video, they feel like they are talking to someone and thus will increase the engagement level with your brand.

You can also create these types of explainer videos with the help of Anireel explainer video. It will provide you a smooth and fast video creation experience and make your imagination true with lots of customizable elements such as animated characters, super catchy scenes, music and many more. It is effortless video editing software as it will simply turn your script to videos in one click. 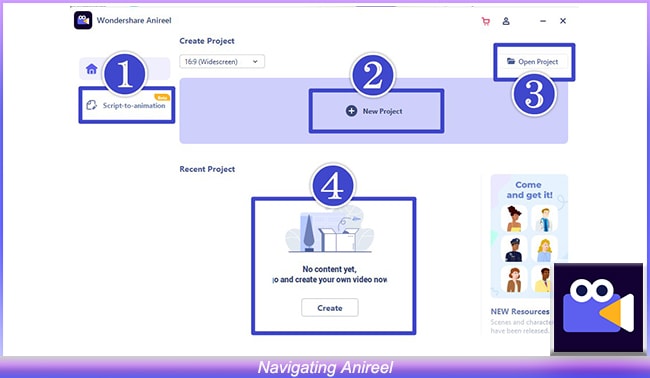 ● If you know how to write an explainer video script then you can very easily promote your products, brands and services very with the help of explainer video.

● Explainer video will save your time and also not let your audience feel bored and get distracted while watching about your brand.

● Always create these types of videos by using specialized applications such as Wondershare Anireel.